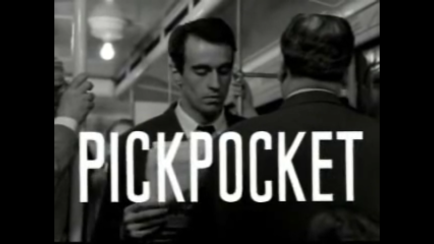 My excuse for having not seen this before is it felt like I had already. At university Pickpocket would come up a lot during film classes. Paul Schrader essentially remade it twice with American Gigolo (1980) and Light Sleeper (92), which are two of his best movies. Both deal with protagonists operating on the margins of affluent social structures. They are loners by nature limiting their interaction with other people to work. Somehow they think this gives them freedom but they have made the world they inhabit small. Nobody really cares about them except for one person and they realise too late they feel the same. Both films share an ending, which I know from the interviews Schrader has given and articles he’s written is lifted straight from Pickpocket so I was never really in any great hurry to see Bresson’s movie.

Having watched it now it’s very much as I thought it would be. Spare, understated, and thematically interested in ideas from the existentialist movement which were becoming increasingly common in French cinema at the time. “Ce film n’est pa du style policier,” says a disclaimer in the opening credits and what follows must have seemed groundbreaking at the time. Plot becomes incidental to character and theme. Its influence on the emerging French New Wave is clear and it reminds me a lot of Jean-Pierre Melville’s equally influential Bob le Flambeur (56) which broke with convention by filming on location and making the setting part of the story. Melville’s film is lighter in tone though. Its world-weary protagonist gives in to his obsession. Michel (played by Martin La Salle) in Pickpocket however is a bit of a wet blanket.

We first see him stealing money from a woman’s purse at a horseracing event. The police arrest him but do not have enough evidence to charge him. Michel gives the money to a pretty neighbour Jeanne (Marika Green) to give to his mother. Later we learn she’s the first person he stole from. The police keep an eye on Michel with one of the officers even strikes up an odd acquaintance. He is mentored by an older thief who shows him the trick of the trade. The money seems incidental. Michel lives quietly in a sparse apartment. He philosophises about whether he is a thief at all. The answer to that is a fairly obvious yes to anybody other than a French existentialist. Michel isn’t as fascinating as he thinks he is. Less of a defiant non-conformist than a waster, he shows all the signs of addiction, the compulsion to steal, the excitement in the moment before he gives into his desire.

Pickpocket seems very much the archetypal Bresson film with its protagonist trying to find some kind of grace in a harsh indifferent world. A recurring theme in his work. I can appreciate its importance and its influence but I like other films by this director more. The Trial of Joan of Arc (62) with its screenplay gleamed from the remaining transcripts of the actual trial, his odd moving deconstruction of Arthurian romance Lancelot du Lac (74), and his final movie L’ Argent (83) which updates a Tolstoy short story and follows the descent into criminality of a young man falsely accused of laundering money.