I am not that familiar with Cecil B. DeMille’s output apart from his Chuck Heston movies The Greatest Show on Earth (1952) and The Ten Commandments (56), which I can remember watching on television as a kid some Sunday afternoon years ago. I’ve always regarded DeMille as being a pious old bore but it seems I misjudged him. Cleopatra is hugely entertaining. A mixture of grand spectacle and Hollywood melodrama. Despite the historical setting Cleopatra feels modernistic in tone. Claudette Colbert’s smart and sexually confident Cleopatra is a fast-talking dame who wouldn’t seem out of place downing cocktails in a speakeasy. Instead of faux Shakespearian dialogue Colbert engages in the kind of repartee she would swap with her leading men in films like It Happened One Night (34, Frank Capra).

This may seem incongruous to anybody who expecting a historically accurate period piece but DeMille is more interested in entertainment. Like the Liz Taylor Joseph L. Mankiewicz 64’ version it’s about visually stunning set-pieces and the allure of beautiful movie stars. It does however manage to get beyond the myth of Cleopatra as a gold digging man-eater and sympathetically presents the lack of choices available to her in the face of Roman expansionism. 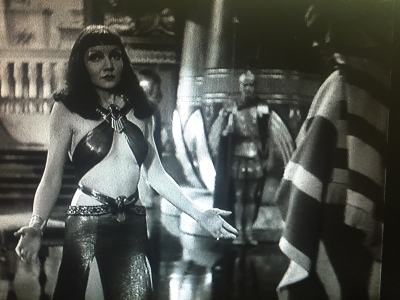 The film begins in 48 BC with Cleopatra’s exile. Fearing she will cause problems at a peace treaty with the Romans, the Prime Minister of Egypt has Cleopatra abducted and left to die in the desert. Julius Caesar (Warren William) agrees terms for her younger brother Ptolemy to become King of Egypt albeit under Rome’s rule. That is until a scantily clad Cleopatra is snuck back into Alexandria and delivered to him in a rolled up carpet. Though she tries to seduce the ageing Caesar it is by offering Egypt as a route towards India that wins him over rather than her womanly charms. It’s more of a business relationship. They both see the mutual benefits in her being Queen of Egypt and an ally of Rome.

Cleopatra and Caesar travel to Rome as a sort of Ancient World celebrity power couple but the Romans are suspicious of her motives and turn against them.  After Caesar’s murder she seduces one of his killers Marc Antony (Henry Wilcoxon) as a means of defending her country but rather than being a pragmatic alliance this time it’s a wild ruinous affair. Wilcoxon is remarkable. Not for his acting talents which are limited but for his machismo. This guy is one of the manliest men ever to grace the screen. He makes Franco Nero look about as tough as Charles Hawtrey.

From here the film moves from a lavish costume drama to romantic tragedy as their hedonistic bliss is interrupted by the arrival of Caesar’s vengeful heir Octavian and his army. Demille throws everything and the kitchen sink into the second half of Cleopatra. There’s a massive battle sequence which is thrillingly orchestrated and surprisingly violent. Though the censorious Hays Code was in place Cleopatra was already in production meaning its ridiculous rules didn’t apply. During the battle there’s a close up of a spiked chariot wheel going through a soldiers leg. The very first image seen during the opening credits involve full frontal nudity, albeit discreetly filmed. There are plenty of allusions to sex and one blatantly S&M sequence as a herd of women in leopard costumes are lightly whipped during a feast.

It makes you wonder what kind of movies DeMille would have been free to make if that wee ferret Will Hays and his supporters hadn’t put Hollywood on a leash. I will definitely be taking a closer look at DeMille’s filmography. It seems historical epics were his chosen genre. He followed up Cleopatra by casting macho man Henry Wilcoxon as King Richard the Lionheart in a movie about the Crusades and that’s now high on my must see list.