Kristen Lopez confesses her dirty little secret to the world. She was a film writer and pop culture commentator that had not seen Citizen Kane. She joins James to confess and correct her shame. In this 90-minute conversation Kristen and James exorcise some demons and confront Citizen Kane’s place in film history, film criticism and popular culture. Is it possible to truly appreciate Citizen Kane without a proper cinematic education?

Recorded in December 2017. Copyrights are owned by the artists and their labels. Negative dollars are made from this podcast.

I meant to post an origin story (they’re all the rage after all) about the beginnings of Cinema Shame but the whole project took off before I could toss this out there. Better late-ish than never. Sometime in high school (1995-ish) when I became obsessed with haunting video stores, my parents bought me a book called THE ENTERTAINMENT WEEKLY GUIDE TO THE GREATEST MOVIES EVER MADE. It had just been published in 1994 and was the most up-to-date guide on movies I’d ever seen. The lists contained within were broken down by genre: Drama, Comedy, Action, Sci-Fi, Western, etc. It even contains an awesomely nostalgic time-capsule section on the best Laserdisc releases.

Anyway, as I went through the book I marked the movies I’d seen and immediately set forth watching every movie counted off in the book. Suffice to say, twenty years later, dog-earned and falling apart at the binding, the book remains a constant around my TV. I’m still marking off movies I’m just seeing for the first time. A few months ago, I began wondering how I could encourage myself to tackle those films I hadn’t yet watched when the notion of crossing another movie off the list hadn’t yet compelled me. I’d tossed about the idea of live tweeting the movies but the rigors of #Bond_age_ made that impossible. Then when @campbelldropout offhand mentioned his 12-film list on Twitter, I had a EUREKA! moment and the ensuing conversation begat Cinema Shame.

In compiling my list of 12, I consulted the EW Guide for a few picks. I looked at the movies I already owned for some others. Perhaps the best aspect of this book is that the lists aren’t routine regurgitation. They contain some surprise entries among the hard-and-fast staples. This might be the result of it being compiled pre-Internet and free from widespread public ridicule. Whatever the reason for it’s longevity, this book has guided my movie watching for as long as I can remember, and I feel like I owed it this fleeting moment of fame.

A sample page from the Sci-Fi/Horror section.

Here’s a sampling of how the book ranks the most listed films by our Penitent Moviewatchers:

No big shock. Kane takes the #1 spot in Drama. 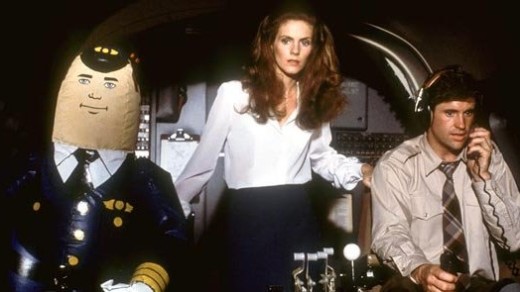 Maybe I love this book because it picked Airplane! as it’s #1 Comedy. Nobody’s watching Airplane!, however. I do hope everyone’s seen it… ahem.

First of all, I want to thank @007hertzrumble for putting this site together and his excitement for this project/adventure and for paying attention to my twitter posts (finally someone pays attention to me). Second, I want to thank @QuelleLove and @LaurasMiscMovie for creating and discussing a list of classic films they will watch in 2014 which gave me the idea of creating a list of classic films that I need to see for the year.

Now the films I have chosen to watch over the next year are consider the classics, either classic in the sense of all film history or classic to a specific genre or both. I believe most of these films will fall under both. There are various reasons I have not seen these films but I have narrowed it down to three.

Below is my list of films for the year, I have switched three films around in order to complete a film for this month. The first film was originally going to be Blade Runner but I have pushed that to February because I wanted to watch the theatrical version of the film and not the director’s cut. For this month I will be watching On the Waterfront and hope to have a post up by next Thursday discussing the film.

Watching movies has always been like a job for me. I love movies. I watch as many as I can, but somehow there have been many that still elude me. I try my best to keep up and catch up, but it’s hard when I’m the only one keeping myself accountable.

Now, thanks to the Internet (Thanks, Mr. Gore!), @campbelldropout, and @007hertzrumble I have other people that will keep me accountable for at least 12 films I really should have seen now. Although, seeing the lists of others, I don’t feel as bad. This site is like a great little support group.

* I watched Glengarry Glen Ross a couple days before this idea was born. I thought about counting it for January since I had never seen it before, but that felt like cheating. That’s why I’m adding Caddyshack.

** I feel like I’ve seen these movies before, but it was so long ago, I can’t remember if I did. I couldn’t tell you anything outside of the standard synopsis, or the pop culture references. Maybe I saw them as a kid, or I only saw clips in a film class. Either way, I need to dedicate time to these.