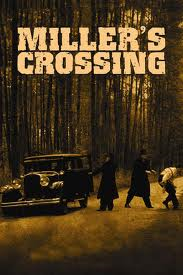 Never has the expression honor among thieves played a larger part in a modern film than in this Coen brothers’ Prohibition era gangster film. Gabriel Byrne stars as Tom Reagan, right hand man to Albert Finney’s crime boss, Leo. Tom, a brilliant strategist in the crime world’s chess game has long had Leo’s ear and his back. He also has Leo’s girl, Verna (Marcia Gay Harden) and this Lancelot/Guinevere affair threatens to undermine King Leo’s reign. 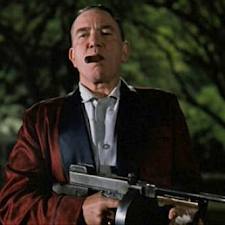 The story begins in a Godfather-like scene with mobster Johnny Caspar (Jon Polito) asking Leo to rub out John Turturro’s Bernie Bernbaum, a bookie with a knack for angering the wrong people. Leo refuses because although Bernie is a thorn in his side, he’s also Verna’s brother. Tom advises Leo to give up Bernie and when he won’t a mob war starts. Tom ends up on Leo’s bad side and despite his loyalty, Tom is cut loose. Caspar snaps him up and Tom seems to have switched sides. Caspar takes over Leo’s businesses and prospers as Tom plants seeds of distrust about Caspar’s main henchmen Eddie Dane (J.E. Freeman) thus eroding Caspar’s gang from within and proving his loyalty to Leo.

Based on the Dashiell Hammett novels Red Harvest and The Glass Key, Miller’s Crossing is a love letter to 1940s film noir and the snappy dialogue prevalent in novels by Hammett, Chandler, Thompson, and Cain. At one point Tom is asked if he knows the mayor. He says, “I oughta. I voted for him six times last May.” The costumes by Richard Hornung, sets by Nancy Haigh and cinematography by Barry Sonnenfeld along with Carter Burwell’s spare and perfect score give the film a 1940s feel. Supporting roles by Steve Buscemi, Mike Starr, Frances McDormand, Michael Jeter, and Olek Krupa add depth to the already stellar cast and the direction by Joel and Ethan Coen just works. The scene with hit men approaching Leo to the strains of Danny Boy is as beautiful as grand opera and as violent as anything Peckinpah ever directed. Poetry. I liked Miller’s Crossing a lot. It has a flawed hero devoted to an equally flawed father figure and crime. Combine that with the Coens usual gang of quirky characters and great dialogue and you have an entertaining and almost Shakespearean story. I cheered for Tom and Leo. I booed for Bernie and Caspar. I hung on every word of dialogue and after watching the film for just under two hours, I wondered where the time went. Here’s another example of the sharp dialogue.
“Come on Tommy, wake up.”
“I am awake.”
“Your eyes are closed.”
“Who you gonna believe?”

How can you not love this film? 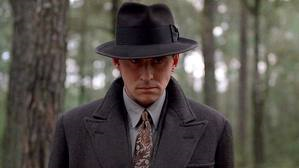 My introduction to the Coen brothers was watching Raising Arizona as a child. Even as a preschool tot it was one of my go to films. I loved the cast and the offbeat humor. The bounty hunter scared me, of course, but his imposing demeanour was softened somehow by his introduction in an ominous, foreboding dream.  It was one of the first films I saw that dealt with regular people getting in over their heads when they dabbled in crime. As I got older and watched more of the Coen’s films, I quickly caught on that this was kind of their thing – and it all started with Blood Simple.

At some point last year, I bought a nice little box of Coen Brothers blu rays. After watching Raising Arizona for the thousandth time, I finally watched Fargo (loved it) and the amazing Miller’s Crossing (thanks to an offhand tweet by @MisterGreggles). Then, I put the box back on the shelf with one unwatched film (still in shrink wrap) and promptly forgot about it – until now.

I don’t know why it took so long to get around to watching Blood Simple. It just seemed that every time I almost popped it in, I decided against it and watched something either more familiar or with way more spaceships. I mean, I knew it was a well liked film, but I just kept convincing myself that watching it would feel like homework. Boy, was I wrong.

Blood Simple is brilliant. It’s smaller than a lot of their later films, but it wears its indie film label well. As in most of their films, it’s a story about murder intersecting with greed and incompetence. Dan Hedaya plays a Texas nightclub owner whose wife (Frances McDormand) is sleeping with one of his employees. Naturally, he’s angry and hires a shady P.I. (played wonderfully by the great M. Emmet Walsh) to “take care” of his little problem.

This being a Coen brothers movie, nothing goes to plan, and the resulting confusion keeps stacking up on itself. Along the way, all the things that made the Coens great are on display.

The casting is perfect and everyone feels real in their roles. I really believed that these characters existed in Texas 30+ years ago. Maybe it’s because I grew up in Texas, but I felt like I had seen these people a million times over in my youth. Dan Hedaya was mesmerizing to me, masterfully capturing the emotions that spill out of the violent when they’re sad. I’ll admit it was a little odd seeing Frances McDormand so young after years of seeing her as a more matronly figure, but her performance is great and I can see why the Coens have returned to her so often in their later works (being Joel’s wife probably helps, too). My favorite, though, is M. Emmet Walsh as the mostly unlikable private investigator. He’s an overly confident, but bumbling, man and he reminded me, in a way, of John Goodman’s despicable one eyed Bible salesman in O, Brother.

The patented dark humor is there as well, especially from Walsh, and there were quite a few chuckles to be had in the midst of such dark happenings. This balancing act between deathly serious and oddly humorous has been a Coens staple for years, and it was good to see that they have had such a firm grasp on it from the beginning.

There are some great shots throughout the film that give a little taste of the iconic images to be found in the brothers’ later works. In particular, there’s a shot of Hedaya crawling on the road that has stuck with me ever since my viewing. While nothing quite meets the high art of Miller’s Crossing’s gorgeous photography, Barry Sonnenfeld still does very solid work as DP.

It’s hard to talk more about the film without just plain giving away a lot of the twists that the script takes, so I will wrap this up with a hearty suggestion that you see Blood Simple soon if it’s on your own personal shame list. Hell, even if you have seen it, you should probably revisit it. It’s definitely a case of hitting all the notes perfectly right out of the gate. I can only imagine coming out of an early viewing, knowing that the filmmakers you just saw at work would be coming back with more greatness in the future.