This has become a most unexpected slice of Shame. Having rewatched Godfather and Godfather Part II to brush up on my Corleone lore for the recently recorded Cinema Shame podcast, I kept right on rolling into Godfather Part III. Why not? The wife and I were invested, hip-deep, quoting the films and proffering our own community-theater Brando impersonations. Of course we would complete the cycle. 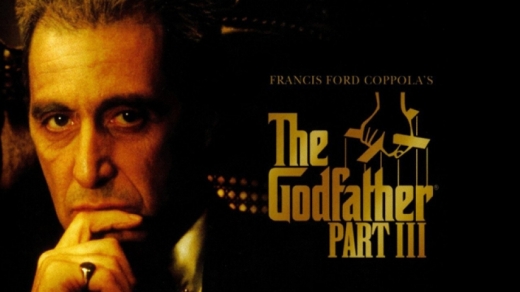 But a funny thing happened shortly after beginning the final Godfather installment. I discovered none of this felt familiar. The wife began probing me for clues about the film’s outcome. I knew the crucial deaths and a few choice quotations. But how we got there? Not a morsel of information.

It’s not uncommon to begun watching a movie and realize I’d actually seen it, but not once in my movie-watching history (at least to my recollection, which I’ve just called into question, so… grain of salt) had I convinced myself that I’d seen a film when I actually hadn’t.

My Shame has taken on a completely new twist. I went into Godfather Part III expecting re-evaluation. Only I had no initial evaluation to reconsider. I suppose latent images and trace memory from my readings had convinced me I’d seen the film. Frequently, the Cinema Shame phenomenon occurs because popular culture has hammered home particular aspects of a film, causing us to feel like we’ve already experienced the story. We already feel like we’ve seen it through the eyes of popular culture. The phenomenon is real and perhaps too powerful. I’m living proof.

Let’s first put a few thoughts on the table before moving on. The Godfather Part III has a bad reputation. It’s considered a lesser film. Our frame of reference will dictate whether we consider it a lesser film or just a lesser Godfather film. The discrepancy is important. The critical mass has duly documented Sofia Coppola’s performance as legendarily bad. Movie-killing bad. As a direct result, this final installment just isn’t properly considered when discussing the Godfather saga.

I may only be merely one voice in a sea of film criticism, but I cannot abide this treatment any longer. 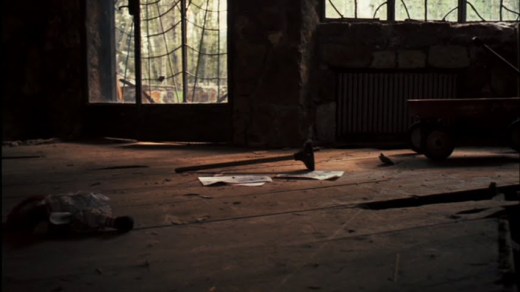 The abandoned and dilapidated Corleone Lake Tahoe compound opens the film, an affecting sequence of still images that sets the tone and propels our expectations. Before anyone sets food on screen, the audience has been primed for one ultimate outcome – the destruction of Michael Corleone and potentially the entire Corleone dynasty. The Godfather Part III offers no misdirection; this film, unlike the first two chapters, promises only tragedy, it promises the end of our anti-hero Michael Corleone and potentially the entire Corleone family. It comes as no surprise to learn that Francis Ford Coppola wanted to name the film “The Death of Michael Corleone.”

The Godfather Part III embraces darkness. Perhaps this river of bleakness offers one reason that audiences failed to embrace the film. It entertains notions of mortality and regret rather than a celebration of machismo and initiative. There’s no measure of hope or optimism for the future. The aging and now ill Michael Corleone attempts to make amends for his familiar failures and repent for his crimes, to scrub clean the Corleone family name. He wants to rekindle the old world familial bonds that he’s eschewed in favor of money and power. The Don has lost sight of the tenant that his father, Vito Corleone, held most dear. Family first. If Don Vito Corleone represents the American Dreamer, Michael Corleone in The Godfather Part III represents a cultural disillusionment with our greatest institutions. Capitalism. Religion. The nuclear family. 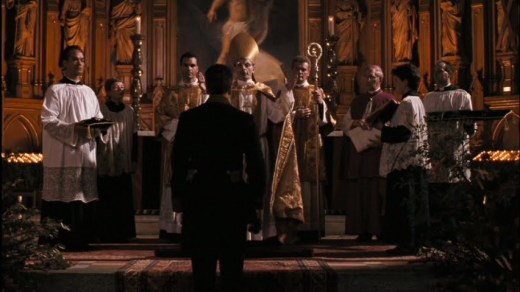 The loss of the Godfather’s pro-active anti-hero from Parts I and II shifts the tone dramatically. Michael manages his diabetes, weighs the value of his life and attempts to return his misplaced focus to the family. His inaction and hesitancy to call for immediate retribution in the face of an obvious assault on the Corleone name takes on an air of defeatism, a far cry from the Michael Corleone that assassinated Sollozzo and McCluskey and launched his career in the family business. He’s staring down a modern world stripped of its moral compass and opting out.

In Michael’s stead, Part III instead provides Andy Garcia’s Vincent (Sonny’s illegitimate son) as the Corleone representation in this new world order. Leather-clad, brash and hyper-reactive, Vincent accepts the bestowal of Godfather status from Michael – an unthinkable development in the Corleone business model. Vincent isn’t even a Corleone. Management of the family business has been outsourced. Plus he’s having sex with his cousin Mary, Michael’s daughter. The corruption of the family from within. 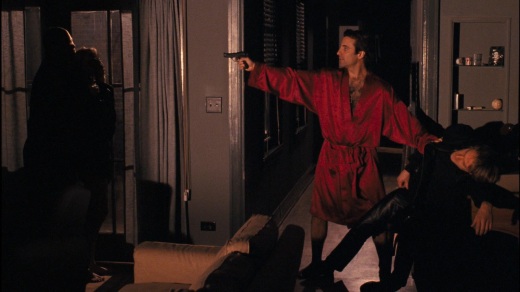 Vincent (Andy Garcia) striking back against a couple of low-level hitmen.

Godfather Part III also benefits from Connie (Talia Shire) coming into her own as an invested and active member of the family rather than just a failed homemaker. She too represents a modern dynamic. The women were once relegated to a shadowed, maternal existence. Willingly naïve of the family business. Connie emerges as a strong central figure, giving orders during Michael’s incapacitation. One could write an entire book on Connie’s journey to investiture in the family business and how that represents the emergence of feminism in the Godfather narrative. She becomes perhaps the most interesting figure in the entire saga. 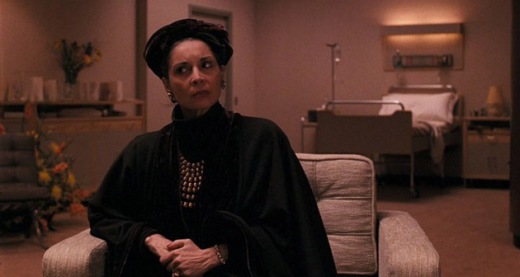 Connie rise to power charts a fascinating course through the Godfather Trilogy.

The obvious criticism of Part III remains Sofia Coppola’s portrayal of Mary. It is unfair to judge the Godfather Part III on Sofia Coppola alone. Yes, she’s distracting. She’s an amateur acting alongside Diane Keaton, Al Pacino and Andy Garcia. She was destined for failure. Context is important, however. Winona Ryder dropped out of the production at the last minute. Coppola, fearing that Paramount would pull the plug on the whole film, asked his daughter to fill the role as an emergency measure to preserve the production. Without Sofia there might not have been a Godfather Part III at all. Just something to think about. 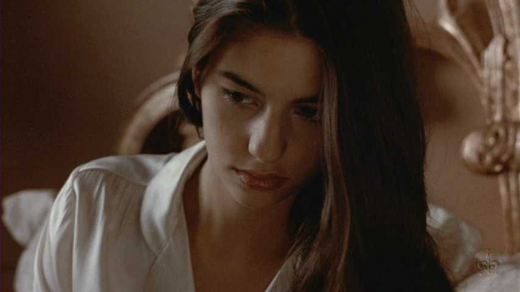 Sofia Coppola is not an adequate scapegoat. This is no Christmas Jones, people.

There’s so much more to the film than Sofia Coppola’s performance that relying on that as criticism feels patently lazy. Intricately woven themes of redemption and mortality remain in play throughout the film. Part III offers a complex and multifaceted analysis of the ways in which power and money has corrupted not only Michael Corleones of the world but the greater institutions designed to protect us.

This sense of total corruption snowballs into a thirty-minute white-knuckle finale that rivals the baptismal conclusion of the first Godfather in terms of complex, layered cross-cutting. The opera assassination sequence features the most tense and thrilling moments in the trilogy. It is masterful filmmaking. 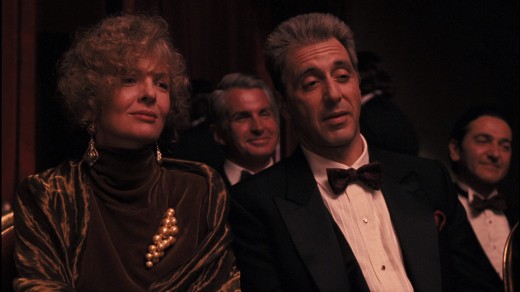 George Hamilton photobomb at the opera.

Only a small bit of comic relief (supplied by Connie) breaks the persistent tension. And rightly so. This is the climax of the entire trilogy. The reckoning for past misdeeds coming to call on Michael in the form of a reaper-like assassin sent by his powerful enemies. The opera house becomes the gateway to the future of the Corleone family. The Corleone hopes and dreams, the plausibility of redemption all hang in the balance.

The film shocked me. I thought I’d merely forgotten, but aside from certain culturally accumulated catchphrases, I’d never really known it at all. The accepted and perceived order of the Godfather films clouded my judgment and distorted my conception of the film. I know now that many of these criticisms had merely been formed based on overly critical and small-minded comparisons. 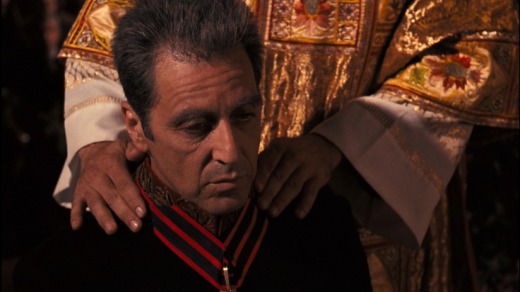 The Godfather Part III was not only worthy; in many ways it surpassed its supposedly greater elders. It’s not the cinematic perfection of its predecessors, but it tells a very human story, a very relatable story – and perhaps as a result it cuts too close and too deeply. The Godfather and The Godfather Part II allowed the viewer a measure escapist distance. The violence and human horror framed in otherness. As part of the mafia, as part of a narrow band of Italian immigrant experience. The Godfather Part III is the human condition – it is all of our stories.